Libor Bittner, Director of Bioveta a.s., voted 2013 Entrepreneur of the Year for the South Moravian Region 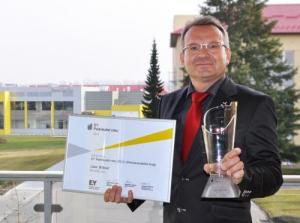 EY Entrepreneur of the Year is the world's most prestigious competition for entrepreneurs that pays tribute to exceptional personalities. Its aim is to show exemplary individuals in the field of business, who could be role models for young, aspiring entrepreneurs, to the public. The EY Entrepreneur of the Year Competition is conceived as an international competition and therefore the criteria, by which individual participants are assessed, are comparable in every country. Currently, as the only competition of its kind recognized world-wide, it is regularly held in nearly 60 countries on six continents.

As a student of the Faculty of Business and Economics, Bittner succeeded in the selection procedure for the Economic Manager in Bioveta. That was in 1991. In the very beginning, he was in charge of the privatization of the traditional manufacturer of pharmaceuticals and biological preparations for animals. This year, along with his three partners, he is expecting revenues of around CZK 1 billion and profit of about CZK 200 million. How did the undeveloped pre-revolutionary enterprise become a sharp capitalist company? At the beginning, Bittner decided that the only way to succeed is to remove products that cannot succeed in the future from the Bioveta product portfolio and to develop new ones that will have the potential to become market leaders and therefore he dramatically reduced production. It turns out that the company managed to pick the right ones. For example, a preparation, which looks like Fidorka, became a hit. But make no mistake, it is a vaccine against fox rabies.