Bioveta a.s. received awards during the biggest veterinary event of the year in Poland 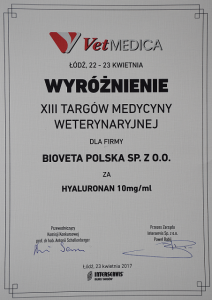 XIII. Veterinary Medicine Fair VetMEDICA and VII. VetFORUM Congress was held under the auspices of the Minister of Agriculture in Lodz, Poland, in April 22-23, 2017.

84 exhibitors from Poland, Slovakia, Germany, Taiwan and the Czech Republic offered their medicaments, biolgicals and veterinary services in the expo hall. The number of visitors from different countries of the world reached 1468. The VetFORUM Congress was held in parallel with the VET Trade Fair side by side.
Dennis B. DeNicola, a renowned expert from the USA , was one of the speakers at the conference. Similarly professional lectures were delivered by other scientists and veterinary practitioners from USA, Poland, the Netherlands and Hungary.
BIOVETA Polska Sp. Z o.o.(Bioveta’s subsidiary in Poland) received special prize in which HYALURONAN 10 mg/ml won the gold medal competition during the VetMedica 2017. During this occasion the Scientific Committee appreciated HYALURONAN, a therapeutic substance against joint illnesses in horses, dogs and cats. Currently, HYALURONAN is the only product of its kind in the Polish market.
The Polish Bioveta team also deserves praise for the careful preparation of this important event, especially DVM Angelika Orlewicz for demonstration of the benefits of HYALURONAN for veterinary practice before the Scientific Committee and veterinary clinicians. Visitors appreciated availability of this product in the Polish market. The general public was also interested in many other products offered in the portfolio of the company Bioveta a.s.