OUR WORK IS WORTH DOING

Homepage News What´s new? OUR WORK IS WORTH DOING 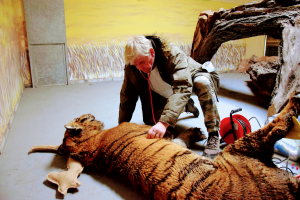 These days, when any positive news is welcomed, I want to share with you the feeling of pleasure we experienced at the turn of the year, also thanks to our company.

At the end of October last year, at least the whole of Europe was circled with the news about the transport of 10 tigers from a cancelled Italian circus to a private zoo in Dagestan (Russian Federation), detained by Belarusian customs officers at the Polish-Belarusian border crossing in Koroszczyn. After a five-day trip, the condition of the tigers in ten small crates on a horse truck was disastrous. They were stressed, dehydrated, emaciated, showing muscle atrophy and aggressive. The cages in which the tigers were transported were inadequate in size, without possibility to feed the animals.  After refusing to enter the Belarus territory, the transport was confiscated by the Polish state authority. The veterinary system alerted all Polish ZOOs with the request to receive the tigers. However, not all of them have the conditions to be able to receive the animals immediately. Dr. Jarek Przybylski from the Poznań Zoo set out immediately to the border, because the zoo had the necessary capacity to take the tigers, but also because the doctor has been using Bioveta’s products for many years. Upon a call with our Polish branch, we managed to deliver the necessary product from Bioveta to Poznan within a few hours. Usually animals are unloaded without immobilisation and sedation, but this was not possible because of the tigers’ condition and it was convenient to use our product. By the start of the operation, one of the tigers died on the Belarusian border, two of the tigers were received by the zoo in Człuchowie and seven tigers were taken to the Poznań Zoo.

Of course, this is not the end of the story. From the very beginning, the Polish media dealt with the whole case and the tigers were daily on the screens of all Polish television channels. There was also a huge wave of human solidarity. All tigers were named and the veterinary care helped them get back in shape. Dr. Jarek Przybylski gave dozens of interviews and became a national celebrity, not forgetting to mention that he was also helped by his friends from Bioveta. After a convalescence period, two tigers - Gogh and Kan, whose condition did not allow further transport, remained in the Poznań ZOO and the other five - Softi, Merida, Toth, Sanson and Aqua - were moved on the first of December to the Spanish AAP Primadomus shelter in Villena, near Alicante, more than 2,500 km away. The shelter specialises in saving exotic animals, rehabilitating them and providing a better future. On 27 February this year, the first of the tigers, male Aqua, finished a quarantine and could start enjoying his new home. The others will follow him soon.

An interview with Dr. Przybylski revealed that he has many years of good experience with using of Bioveta's products in practice in the Poznań ZOO, which dates back to 1871 and is the oldest zoological garden in Poland.

A separate chapter of this tiger story is the current European legislation enabling the transport of tigers in unsatisfactory conditions only on the basis of a document issued by Italian authorities, which allowed the transport of caged animals on an unsatisfactory vehicle, and on the basis of a document issued by an Italian veterinarian who confirmed that the health of the tigers makes the transport possible. Based on the mutual recognition of documents between EU Member States, documents enable subsequent transport by all EU countries without any additional control. Moreover, veterinarians check the condition of animals at the entrance to the EU area, but not at the exit. Here, the European legislation is probably wrong. I am very worried that if the tigers continued their travel to Dagestan, i.e. about another 2,800 km, then they would arrive at their destination in a state of usability in Chinese medicine only.

Finally, I would like to thank the entire Bioveta team for their cooperation in the production and supply of products for the Polish market. In addition to PET breeders, the products are now used in Poland by both small farmers and the largest producers of pork and beef. The Odyssey of successfully rescued 9 tigers is just a shard of the important work we are doing together. You can see the result in the photo where Dr. Przybylski examines the male Aqua shortly after being transferred from the Polish-Belarusian border. The video shows Aqua in his Spanish quarantine and the next video captures Aqua after being placed in his enclosure.