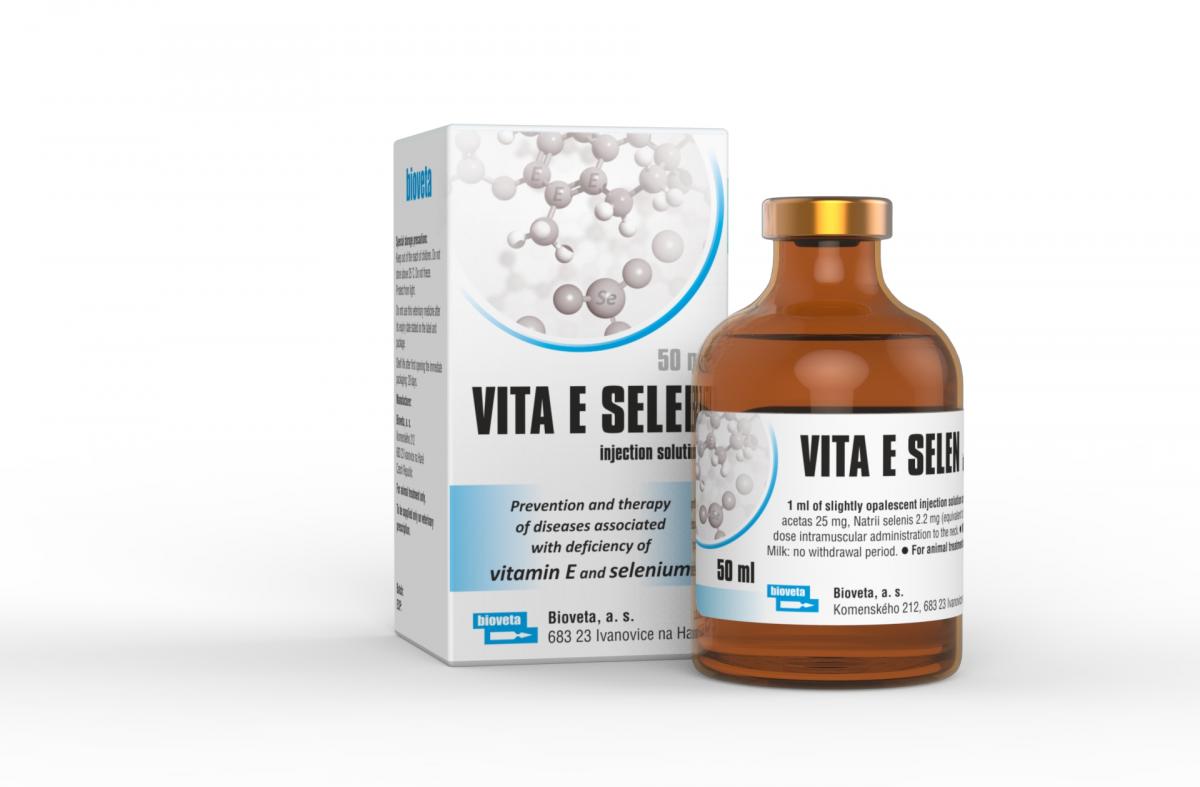 Prevention and therapy of diseases associated with deficiency of vitamin E and selenium, especially muscular dystrophy in young livestock; beneficial effect on the reproduction of cows

Can we help you?

1 ml of the product contains:

Indications for use, specifying the target species:

Prevention and therapy of diseases associated with deficiency of vitamin E and selenium, especially muscular dystrophy in young livestock; beneficial effect on the reproduction of cow.

Do not use in case of hypersensitivity to the active substances or to any of the excipients.

Special warnings for each target species:

Special precautions for use:

Special precautions for use in animals

Prior therapy should be checked before the administration (preparations containing selenium, feed ration supplements, licks containing selenium etc.) to avoid the accumulation of selenium. Mass application should be preceded with a tolerance test in 20% of animals of the herd. The observation period is 24 hours.Special precautions to be taken by the person administering the veterinary medicinal product to animals. Do not eat, drink or smoke while handling the product. Avoid contact with skin, eyes and mucous membranes. After contact with skin wash immediately under running water and take off contaminated clothing which is in contact with skin. When handling the veterinary medicinal product, particularly in case of repeated administration (e.g. on factory farms), personal protective equipment consisting of protective gloves should be used. In case of contact with eyes, rinse with plenty of drinking water.
In case of any problems seek medical advice and show the package leaflet or label to a practitioner.Accidental self-injection may cause anaphylactic reaction. Anaphylactic reactions, some of which may be fatal, have been reported in animals injected with vitamin E and selenium. People with known hypersensitivity to sodium selenite (or other salts), vitamin E or any of the excipients (see section 6.1) should avoid contact with the veterinary medicinal product.
Avoid accidental self-injection. In case of accidental self-injection seek medical advice immediately and show the package leaflet or label to a practitioner. The veterinary medicinal product should not be administered by pregnant women.

Use during pregnancy, lactation or lay:

Administration of the product during pregnancy and lactation is possible. Interaction with other medicinal products and other forms of interaction:
Simultaneous administration of selenium and amino acids (Met, Cys, L-Lys), vitamin C and vitamin E has a protective effect.

Amounts to be administered and administration route:

General dose for a cow: 0.04 ml of the product/kg bw, i.e. 1 mg of vitamin E and 0.088 mg of selenite. Large injection volumes should be injected into several sites.The stopper can be punctured up to 50 times.

The average therapeutic dose (0.44 mg of sodium selenite and 5 mg of vitamin E) /kg bw of animal is sufficiently therapeutically effective and safe. Due to the potential risk of selenium toxicity, the exact dosage should be followed. No specific antidote has been determined.
In case of allergic reactions, it is necessary to apply an antihistamine, or an injectable calcium product.

The selected combination of selenium and vitamin E acts very effectively in a variety of disease states caused by deficiency of the trace element selenium and vitamin E in livestock (myopathy and exudative diathesis). Both the active ingredients potentiate the effect of each other.
Vitamin E prevents the formation of bonds between lipoperoxides and unsaturated fatty acids (an important component of cell walls), thus protecting cell membranes from destruction. Originating tocopherol radicals may be reduced by ascorbic acid. Selenium is needed in cells for the formation of glutathione peroxidase (GPX), which acts as an antioxidant in the cell fluid; hydroperoxides and lipoperoxides are converted with glutathione to harmless reduced forms. With this effect selenium supplements the protective effect of vitamin E.

The pharmacokinetics of vitamin E is related to its lipophilic nature. After intramuscular administration it is absorbed through the lymphatic system into the blood, where it is bound to lipoproteins. Metabolization takes place in the liver. Organ distribution is wide, high levels are present in the parenchymatous organs and fat. Utilization takes place in the target organs. Unused vitamin E is eliminated in urine. Vitamin E is excreted in milk, crossing the placenta is limited.

The functional form of selenium in the body is selenoproteins. Selenium administered in the form of selenite is reduced to selenide in the blood, which is incorporated in selenoproteins in the liver. After intramuscular administration, the absorption from the injection site is relatively fast in general, with some interspecies differences. Selenium is absorbed into the blood at the injection site (selenite is reduced to selenide). In the liver selenide is incorporated into selenoproteins. Selenoproteins are distributed by the blood to the place of destination (they form a functional GPX place). Organ distribution is wide, highest levels are found in the liver and kidneys. Selenoproteins are degraded through methylated metabolites. Elimination occurs by urine, faeces and via lungs in case of excessive intake. Selenium is excreted in milk and is transported across the placenta. Interspecies differences in the pharmacokinetics of selenium include a slower absorption from the injection site and a prolonged retention of selenium in the liver and kidneys of calves; in pigs the retention of selenium in the kidney is higher than in sheep.

Store below 25°C. Do not freeze. Protect from light.